Are we lockedinside the prison of our own mind and thoughts? Our latest stage performance of our theatre makes us think while entertaining. The tale becoming alive in an abstract environment is about Don Quixote, the melancholy-faced knight who was dreaming a nicer and better world so long that he finally believed it to be existent. It is interesting that the original musical made its debut on 22nd of November, 1965 at the Square Theater in Washington, then the production was moved to the Martin Beck Theater and was performed 2328 times. The first European performance was held in Madrid, the Hungarian premiere took place at the Budapest Operetta Theatre in 1971 with Iván Darvas in the lead role. After decades long the performance is again on our stage and will be performed true to its text and notes but with modern equipment, concept and spectacle, compelling costumes, excellent cast on 20th March. The key roles will be played Szilveszter Szabó P., Miklós Máté Kerényi, Attila Serbán, Péter Sándor, Anna Peller and Annamari Dancs, the director-choreographer is Balázs Vincze.

“Sancho, thou must know, that, by the will of Heaven, I was born in this age of iron, to revive in it that of gold, or - as people usually express it - the golden age”

The presentation of the Man of La Mancha was made possible by the agreement between Concord Theatricals Ltd. and the Theatrum Mundi Színházi és Irodalmi Ügynökség. 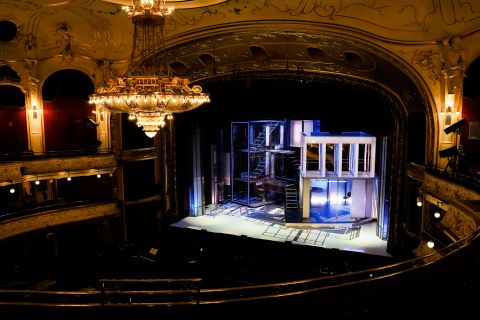