Holocaust Memorial Center
Where the Past shapes the Future…

The Holocaust Memorial Center, opened in 2004, is to be found in an unusual building complex, which consists of the Páva utca Synagogue, designed by Lipót Baumhorn in stunning eclectic style around the turn of the century, and an adjoining new wing, built according to the plans of award-winning architect István Mányi. A brilliant marriage of the historic and the modern, the building complex demonstrates the power of contemporary design juxtaposed against a historical setting.

The permanent exhibition – entitled „From Deprivation of Rights to Genocide” – is presenting the history of the Hungarian Holocaust through series of real family and personal accounts. Within each thematic unit, the visitors can view films, photographs, interactive maps and original documents with the help of touch screens.

The Memorial Place of the Hungarian Holocaust commemorates more than 500.000 victims by preserving the names which have been restored by today. The visitors are supported by a computerized database in finding the names of their eventual relatives or friends.

The Memorial Centre is also home of collection, educational programs and professional conferences. Although lying downtown, in the heart of the city, yet providing intimacy in ist quiet courtyard, library. 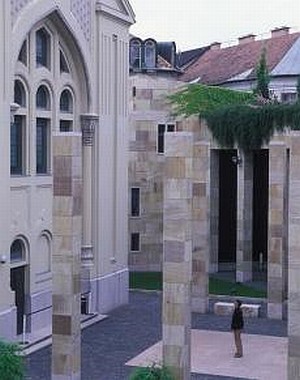